More labour with lower yields is a luxury only rich populations can afford.

By Dr. HENRY I. MILLER

Are organic vendors scamming you? 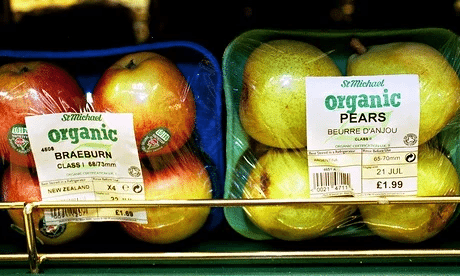 You may have noticed that the organic section of your local supermarket is growing. Advocates tout organic-food production—in everything from milk and coffee to meat and vegetables—as a “sustainable” way to feed the planet’s expanding population. The World watch Institute, a Washington, D.C.-based environmental group, goes so far as to say organic farming “has the potential of sustainable food delivery  by improving nutrition intake and sustaining livelihoods in rural areas, while simultaneously reducing vulnerability to climate change and enhancing biodiversity.” The evidence argues otherwise. 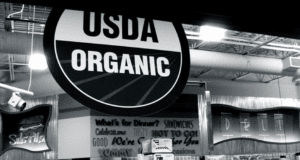 A study by the Institute for Water Research at Ben-Gurion University in Israel, published last year in the journal Hydrology and Earth System Sciences, found that “intensive organic agriculture relying on solid organic matter, such as composted manure that is implemented in the soil prior to planting as the sole fertilizer, resulted in significant down-leaching of nitrate” into groundwater. With many of the world’s most fertile farming regions in the throes of drought, increased nitrate in groundwater is hardly a hallmark of sustainability.

Moreover, as agricultural scientist Steve Savage has documented on the Sustainablog website, wide-scale composting generates significant amounts of greenhouse gases such as methane and nitrous oxide. Compost may also deposit pathogenic bacteria on or in food crops, which has led to more frequent occurrences of food poisoning in the U.S. and elsewhere.

Organic farming might work well for certain local environments on a small scale, but its farms produce far less food per unit of land and water than conventional ones. The low yields of organic agriculture—typically 20%-50% less than conventional agriculture—impose various stresses on farmland and especially on water consumption. A British meta-analysis published in the Journal of Environmental Management (2012) found that

Lower crop yields are inevitable given organic farming’s systematic rejection of many advanced methods and technologies. If the scale of organic production were significantly increased, the lower yields would increase the pressure for the conversion of more land to farming and more water for irrigation, both of which are serious environmental issues.

“Performance is a better paradigm for sustainable agriculture.”

Another limitation of organic production is that it disfavours the best approach to enhancing soil quality—namely, the minimisation of soil disturbances such as tilling, combined with the use of cover crops. Both approaches help to limit soil erosion and the runoff of fertilisers and pesticides. Organic growers do frequently plant cover crops, but in the absence of effective herbicides, often they rely on tillage (or even labour-intensive hand weeding) for weed control.
One prevalent myth is that organic agriculture does not employ pesticides. Organic farming does use insecticides and fungicides to prevent predation of its crops. More than 20 chemicals (mostly containing copper and sulfur) are commonly used in the growing and processing of organic crops and are acceptable under U.S. organic rules. They include nicotine sulfate, which is extremely toxic to warm-blooded animals, and rotenone, which is moderately toxic to most mammals but so toxic to fish that it’s widely used for the mass poisoning of unwanted fish populations during restocking projects.

Perhaps the most illogical and least sustainable aspect of organic farming in the long term is the exclusion of “genetically modified organisms,” but only those that were modified with the most precise and predictable techniques such as gene splicing. Except for wild berries and wild mushrooms, virtually all the fruits, vegetables and grains in our diet have been genetically improved by one technique or another, often through what are called wide crosses, which move genes from one species or genus to another in ways that do not occur in nature. Therefore, the exclusion from organic agriculture of organisms simply because they were crafted with modern, superior techniques makes no sense. It also denies consumers of organic goods nutritionally improved foods, such as oils with enhanced levels of omega-3 fatty acids.

In recent decades, we have seen advances in agriculture that have been more environmentally friendly and sustainable than ever before. But they have resulted from science-based research and technological ingenuity by farmers, plant breeders and agribusiness companies, not from social elites opposed to modern insecticides, herbicides, genetic engineering and “industrial agriculture.”

Dr. Miller, a physician and molecular biologist, was the founding director of the FDA’s Office of Biotechnology and is a research fellow at Stanford University’s Hoover Institution.

If organic farming is not sustainable  and actually damages the environment more so than conventional advanced farming, is it right to support the movement?